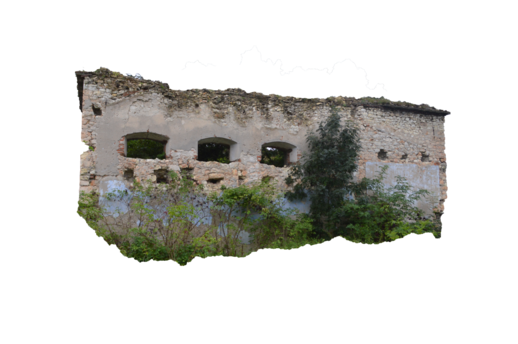 Rosenberg's Poland >> This video work, Here is an early sketch for an upcoming research-based media work created in collaboration with sound artist Gambletron. Centered around the ruins of an 18th-century synagogue in the southern Polish village of Tarłów, this project began as an exploration of Nawracaj and Gambletron's mutual southern Polish roots.

​In 2017 the artists traveled to Tarłów to find the town's synagogue, which stands unmarked, crumbling, overgrown and desecrated. Rabbi Yehudah Yudel Rosenberg (1859-1935) led the congregation at this site from 1885 to 1890. Sound artist Gambletron is Rebbe Rosenberg’s great-great-grandchild.

Nawracaj was born in Nowa Huta, less than two hundred kilometers from Tarłów.​

When the artists arrived in Tarłów they were struck by the sheer erasure of the town’s Jewish history. The Synagogue where Rosenberg took his first post as Rabbi is not only unmarked and in ruin, it is also full of empty bottles and other upsetting detritus. Witnessing the ruin and erasure, Gambletron and Nawracaj began recording sound a video at the site of the Tarłów Synagogue. This documentation, along with screen recordings of the artists orienting themselves through Tarłów via Google Maps form the body of this video.

The word “here,” written in Yiddish, Polish, Hebrew, and German floats over the documentation footage along with abstracted renderings of stones that remain in the Synagogue’s walls. Tentatively mirroring the building’s floorplan, the words gesture towards translingual lineage and generational place-making. As Gambletron and Nawracaj explore their geographically adjacent bloodlines, the site of Rabbi Rosenberg’s first Rabbinical appointment has become a transhistorical “here,” a touchstone for diasporic Polish-Jewish collective memory and the site for imagining a present and future in which the violent erasure of Jewish presence from this place is met with healing and steadfast intergenerational caretaking.

This project has become a method of digital place-making for the artists who are not only collaborators but also a queer nonbinary couple. The pair consider how this project might grow as a means to connect with diasporic communities as well as those who remain in Poland- a country still struggling with antisemitism as well as a government that spreads homophobic and transphobic propaganda while taking frightening measures against reproductive freedoms.