"45 Library is a collection of speculations by artists, designers, and architects on the subject of the presidential library for the 45th president."

Nawracaj's contribution to the 45 Library project comes in the form of a video in which a Frankenstein's monster of a speculative structure is cobbled together from pieces of other presidential libraries. A critical text accompanies the work. 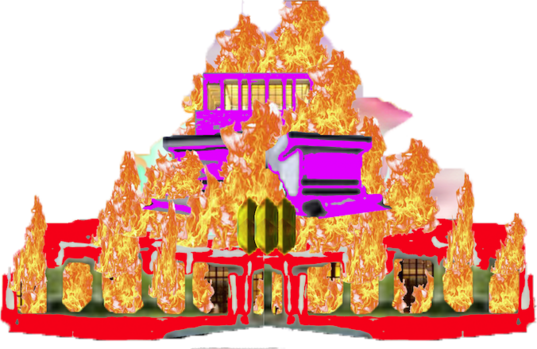 How can we propose a 45th presidential library at all?

Whether critical of the administration in question or complicit with its duplicitous self-narrative, any project that monumentally centers a presidency and governing administration ultimately upholds its very structure if not its views policies and actions. The very act of erecting such an institution, a process enacted some 14 times under the purview of the U.S. National Archives and Records Administration (NARA)(1), replicates the presidency, acting like a shadow, an administration's mark for posterity, a monument to its legacy- if not celebratory, then legitimizing of its very structure, built over and over again as if to say “so it has been and so it shall be.”

A snake winds itself around stolen land and millions of people for a period of four to eight years before coming to feast on its own tail in an act proclaiming the mythic whole that is The State. An imagined hegemonic infinity is conjured out of 45 arbitrary blocks of time, short enough to bear the limits of democracy and long enough to do serious damage with consequences far exceeding borders drawn by colonial politics. 45 and counting. Then comes the library. Standing like the stone remnant of one that looked upon the basilisk- only resplendent with glass and flags and lawns and fountains. On stolen land. Charging admission. An institution that in only 14 administrations has become as inevitable as a presidency in its 45.

So what kind of built environment is right to house all that the 45th has to reveal by the archival trace of its draconian existence? Should we look to the 14 standing for notes on prevalent style? We have a glossy obsidian monolith reflected in the water below like some imagined alien vessel mocking humanity with its prowess. Then there are the austere colonnades- stark neoclassical references pared down to crypto-fascist slickness. Others play it safe with modestly sloped roofs and hedges trimmed to suburban standard or opt for the equally ubiquitous brutalist, unmistakably institutional concrete prism. Some invite with gleaming paved pathways curving gently between tightly shorn lawns. Some impress with golden light streaming from enormous windows. With aesthetics ranging from tidily groomed to starkly governmental to near palatial, these buildings beg the question of access. These so-called “libraries” seem to function more like museums, charging admission and displaying curated content. Museums operate on a colonial framework exemplifying what writer Alicia Elliott calls “extraction mentality.”(2) A text accompanying Reimagining the Museum, Open Letters and a Decolonial Framework, Hammer Museum curator Erin Christovale's recent conversation with artist Jasmine Gregory, art conservator LaStarsha McGarity, and curator Yesomi Umolu puts it clearly: “The History of museums is tied to the colonial impulse to collect...” In the case of the presidential library system, the collections held in its various buildings are some of the very documents that perpetuate extractionist actions by the government of a colonial nation. And who is it that visits with these documents? What publics are these institutions serving? The library of president number 39 in Simi Valley, California charges as much as $29.95. What would an opulent institutional archive of 45's vile tenure demonstrate that people everywhere haven't already shown- in works and words well documented, and by the consequences this presidency's white supremacist legacy has brought upon their very lives

Buildings use intimidation tactics, too. Is the crushing power of looming institutional structures lost on many permitted to enter when racists walls stand and people are being held in cages? 45 is a name already polluting skylines. The resorts brandishing this name have siphoned tax dollars hosting 45 and his entourage on government business at exorbitant prices. This 45 that spews and acts on hate, that fuels and embodies white supremacy. For so many reasons the thought of putting that name on yet another building is nauseating.

So in these thousand words that demarcate the bounds of a fantasy world in which the NARA has made room for us and neither 45 nor 45's cronies get to come anywhere near this thing I suggest the simplest path:

More than that. Fuck imperialism, the two-party system, the carceral state, continued colonialism and the monumentalisation of it all.

The Obama Foundation has introduced the first presidential library to be entirely accessible online, with the 44th president opting out of the NARA system and moving forward with a presidential center aimed at developing a center owned by the city of Chicago and not operating on federal funds. Of course, institutional issues are bound to arise in this model as well. Issues of access are also relevant online as they are within every nonprofit. It is important, in the face of such a monumental abuse of power as demonstrated by 45, that we remain critical of the other 44.

So let people be the living library of the 45th and all 44 before that. Let all presidential papers be digitized and made as accessible as possible in reduced file sizes. Let information circulate and media literacy be nurtured. Perhaps the NARA can work with individual states to identify underfunded libraries in public city systems. What if the millions of dollars in gifts on top of government funding historically used to build presidential libraries could be diverted towards programming and boosting membership in already established library systems- ones that operate locally and don't charge admission.

In place of another monumental archive, let's consider the land these buildings stand on.

What if, in place of a library dedicated to 45, the NARA set about returning the land in its purview to Indigenous communities? Erin Chirstovale posted a statement on Instagram (@erinzulie) after Reimagining the Museum that included the following: “I envision the decolonization of museums in the US starting with returning the land to the Indigenous populations... A decolonial museum would mean the museum as we know it would not exist.” In Land Back: A Guide to Returning Stolen Land to Your Indigenous Community”(3) Corinne Rice and Andrew Perera explain how the “colonial understanding of land ownership (...) differs from the Indigenous idea of land stewardship.” They go on to explain that land deeds can be signed over to Tribal Nations in a legal process that “takes 1-5 years to finalize.” After the deed transfer, those who made the transfer may still operate on said land but pay Tribal taxes instead of being taxed by the state. Determined through the app Whose Land (suggested by Rice and Perea in their guide) I'll end here with a list of the NARA's current libraries and whose territory they stand on: